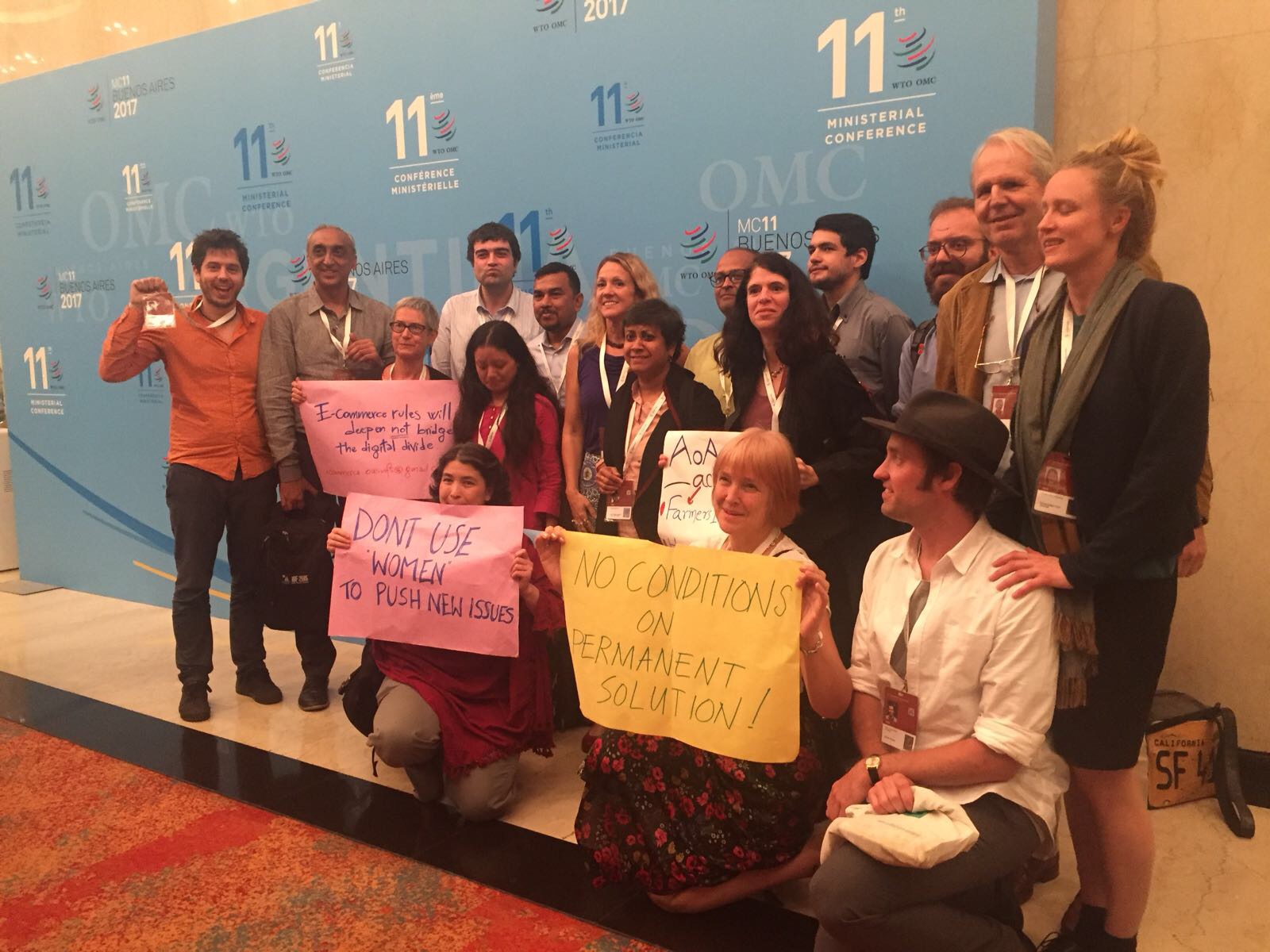 Our World is Not for Sale (OWINFS)

As 80 civil society representatives from over 30 countries here with the global Our World Is Not for Sale (OWINFS) network, we are deeply disappointed that WTO members once again missed a crucial opportunity to address fundamental problems in the global trading system, and at the same time relieved that the push by giant technology corporations for an agenda to expand WTO rules over the future digital economy failed to garner support by a majority of members.

Despite a mandate to find a permanent solution for public stockholding MC11, members failed to remove WTO constraints on countries’ ability to feed their hungry populations and improve farmers’ livelihoods; on a workable Special Safeguard Mechanism (SSM); and on disciplining subsidies that distort trade and damage farmers’ livelihoods around the world. Likewise, they made no progress on the key issue of addressing WTO constraints to development, having completely ignored the G90 development proposals. Fortunately, given that there was no Ministerial Declaration, previous affirmations of the development agenda still stand. It is unfortunate that members were not able to agree to discipline fish subsidies, but given that some members opposed preserving development policy space in fisheries, it is better that members continue consultations in Geneva.

At the same time, we welcome that the majority of members saw clear that it is far too premature for the WTO to begin negotiations on the digital economy, and simply reaffirmed the existing working program for discussions on e-commerce. Likewise, the majority of countries agreed that countries’ sovereign right to regulate in the public interest should not be further limited by the WTO, and that “domestic regulation” disciplines are not necessary, and thus no new rules on “domestic regulation” were agreed. Likewise, most members realize that new negotiations on investment facilitation are unwarranted, and decided against a new mandate on this issue.

Other issues like micro- and small- and medium-sized enterprises (MSMEs) and “gender and trade” are Trojan Horses for sneaking in “new issues” like e-commerce, and represent the wrong agenda of further benefits for corporations at the expense of jobs and development. A declaration against the appropriation of gender to further liberalization was signed by over 164 groups in 24 hours this week. Likewise, myriad MSME associations raised objections to the e-commerce agenda and against the so-called “MSME work programme” that is against their interests.

Despite many of our representatives from civil society having been unjustly, and without due process, banned from participating, those of us who were allowed in have raised our voices about the negative impacts of existing WTO policies on workers, farmers, the environment, development, and the public interest, calling for fundamental transformations to the existing trade system. We believe in a democratic, transparent, and sustainable multilateral trading system, and do not want to see the WTO depart even further from that ideal, and will continue our call on governments not to expand the failed model of the WTO to new issues.

It seems that the United States came to Buenos Aires with an agenda of rejecting the consideration of development concerns in trade. The U.S. attempted to bully its way into shaping an outcome in its interests, but the majority of developing countries – having faced the brunt of negative WTO policies for so many years – resisted this pressure. We are just as disappointed at the EU, since it failed to play a constructive role at the Ministerial. While claiming to build consensus, it stuck with a discredited approach of expansion of WTO trade rules, deregulation, increasing market access, while refusing to repair the existing WTO rules which are harmful to developing countries. We recognize the leadership of the African Group, India, the ALBA group of Latin American countries, and other countries in defending that multilateral trade policy should foster, rather than constrain, development prospects.

No matter the outcome, the WTO as an institution continues to exist and continues to have rules that are detrimental to developing countries, workers, farmers, the environment, and the public interest generally. These rules need to be fundamentally transformed as we have outlined in the Turnaround Agenda, endorsed by hundreds of civil society organizations from around the world, which is similar to the objectives of the developmental aspects of the Doha Development Round. The Dispute Settlement mechanism will continue to enforce asymmetrical rules against developing countries and public interest regulations. Moreover, its effectiveness depends on the complaining country’s ability to retaliate, making it useful for powerful countries but less so for developing countries.

With or without agreements at the MC11, the new paradigm of plurilaterals and the continuation of bilaterals are used by neo-liberal trade negotiators in different countries to impose their agenda of further expanding trade and investment rules. Such new trade rules further restrict the ability of countries to pursue public policy objectives such as the promotion of health, education, and employment, as well as the protection of the environment and labor rights. We support the conclusion of the development aspects of the Doha Development Round, but we oppose the expansion of liberalization trade rules – be they though bilaterals or plurilaterals or multilaterally in the WTO.

We applaud the majority of developing countries at the WTO ministerial conference in Buenos Aires, Argentina, who have held firm against massive pressure, led by Japan, Australia and Singapore, to launch negotiations on electronic commerce in the WTO.

A series of proposals on e-commerce tabled since mid-2016, initially by the US and then pursued by Japan and the EU, were designed for, and largely by, the Big Tech companies.

A Joint Statement on Electronic Commerce issued late morning of the final day of the conference was supported by a minority of the 164 WTO Members. They plan to hold ‘exploratory work towards future WTO negotiations’, even though there is no mandate from the Ministerial Conference to take e-commerce any further than the ‘discussions’ that are currently authorised.

We see this electronic commerce statement as a repeat of the tactics used in the Trade in Services Agreement (TiSA). A self-selected group of countries took it upon themselves to rewrite the trade in services rules of the WTO in ways that intrude deeply on nations’ right to regulate and without any development dimension. TiSA had no WTO mandate and was in theory was conducted outside the WTO, but the Secretariat was complicit by facilitating its meetings.  The same must not happen with e-commerce.

The statement seems carefully to avoid the word plurilateral, presumably to play to Trump sensitivities, but the United States is on the list of participants.

It is not clear why electronically transmitted products should not contribute to the tax base while products that are traded through traditional mechanisms usually do. However, it is a positive outcome that the moratorium on TRIPS non-violation complaints, which is essential to ensure lifesaving medicines for millions of people, was approved, although it should have been approved on a permanent basis.

Existing investment rules have given new rights to corporations to profit in countries while putting taxpayers on the hook for millions in payouts for upholding public interest regulations. Even if the proposals focus on investment facilitation, this is not a trade issue per se, and UNCTAD is already the primary multilateral agency working on investment. No new work program on IF is a positive outcome of MC11.

The SDGs agreed by all WTO members include a focus on expanding access to and quality of many public services, as well as other key services like financial services and telecommunications. The proposed rules on Domestic Regulation would severely undermine the regulatory sovereignty of countries. Governments – not trade panels - should have the authority to decide community issues that are inherently subjective. Foreign companies should not have “rights” to input on measures proposed by local or national authorities before they are decided domestically. Members have not yet agreed whether disciplines on these measures are “necessary.” No disciplines on domestic regulation is a positive outcome for MC11.

Fishing: Subsidizing the Poor or the Rich?

There is a clear mandate for a pro-development and pro-environment outcome on disciplining fishing subsidies. But existing industrial fishing nations are insisting on rules that would undermine the future developmental aspirations of developing countries and harm existing artisanal fisherfolks’ livelihoods.

The developmental and economic policy space of developing countries must be maintained whilst those nations that have contributed most to the problem of IUU and overfishing must agree to eliminate harmful subsidies. Since policy space for development was not protected, it is better that members agreed to continue negotiations on fish.

What Should Have Been on the Agenda: Transforming Existing Harmful WTO Rules

There remains an urgent need to transform existing WTO rules which are constraining policy space for job creation and development, including achievement of the Sustainable Development Goals (SDGs). The Doha Work Programme on development must be concluded as soon as possible, rather than permanently shelved in favor of a big business agenda of WTO expansion.

Agriculture rules in the WTO must be transformed. A permanent solution for public stockholding that is workable for all developing countries, and a workable Special Safeguard Mechanism (SSM) should have been agreed as the top priority of MC11. Current inappropriate proposals on agricultural subsidies fail to take into account the huge dumping impact of domestic subsidies on exported products while calling on developing countries to cut subsidies.

The top priority for a genuine development agenda would be transforming the current rules on agriculture. Rich countries, not the poor, are currently allowed to subsidize agriculture under WTO rules – even in ways that distort trade and harm other countries’ domestic producers. It is unfortunate that members did not agree to reduce the subsidies of developed countries under “domestic support” – including in the “Green Box” category of subsidies when these actually have trade-distorting impacts.

Subsidies that the US and the EU provide to cotton producers enrich a few thousand there, but have unfairly decimated production of hundreds of thousands of cotton farmers in Africa. It is deeply disappointing that members did not decide to significantly reduce or eliminate developed countries’ domestic supports for cotton at MC11.

By contrast, most developing countries are only allowed miniscule subsidies. But the SDGs entreat countries to increase investment in sustainable agriculture. Also, there is growing acceptance of the “right to food” as a human right. One of the international best practices for supporting farmers’ livelihoods, ensuring food security, and promoting rural development is “public stockholding.” But these programs - in dozens developing countries - often run afoul of WTO rules – even though the agriculture supported is not traded in global markets.

Supports by China and India to farmers on a per capita basis remain miniscule – only a few hundred dollars per farmer, as compared to tens of thousands for the United States. Supports in Africans and many Middle Eastern countries and LDCs should be increased even if they don’t have existing programs.

Members had a commitment to deliver a positive resolution on the public stockholding issue that would have allowed all developing countries to implement food security programs without onerous restrictions that are not demanded of developed countries’ trade distorting subsidies, and it is deeply disappointing that they did not resolve this issue.

Along with transforming the global rules governing agricultural trade, developing countries have long advocated for other changes to the existing WTO to increase flexibility for them to enable them to enact policies that would promote their own development.

The G90 proposals for changes to existing WTO rules would remove some WTO constraints on national pro-development policies. These would allow developing countries to promote manufacturing capabilities, stimulate the transfer of technology, promote access to affordable medicines, and safeguard regional integration. It is deeply disappointing that the G90 proposals, without being conditioned on further market access concessions, and the Para 44 mandate to continue post-MC11, were not agreed at MC11.