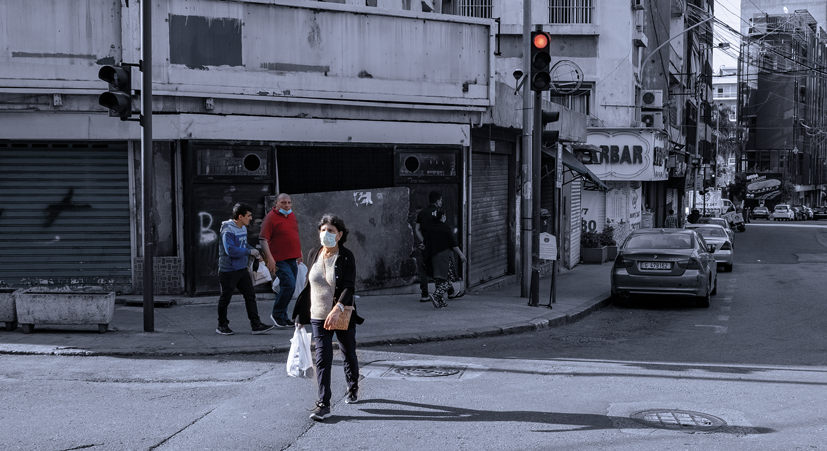 The COVID-19 pandemic had detrimental economic impacts globally - as of this publication, the global recorded infections rate nearing 93 million cases since the start of the outbreak. While an impact was inescapable, its severity was due to policy choices made by governments not only during the pandemic, but in the decades preceding it, which witnessed a trend of economic liberalization policies and other neoliberal reforms.

The MENA region’s governments have, over the past decade, undergone significant austerity policies as a part of IMF-backed liberalization reforms, EU aid agreements, and macro-financial assistance packages.

When considering who was impacted most, and the government policy responses, it is evident that the crisis revealed deep structural flaws in the systems governing social protection and labor policies. It also revealed that these policies are active choices on the part of government and international stakeholders, rather than anything set in stone.

The MENA region is arguably the world’s most unequal region — about 10% of the region’s wealthiest capture 76% of its wealth; about 1% capture 30%. And this was worsened in the past decade: between 2010 and 2019, the number of individuals with assets worth more $5 million increased by 24%.

In this same period, the MENA region experienced waves of protests and social movements demanding social justice and the dismantling of authoritarian regimes. Jordan’s Human Development Index decreased in this period; Lebanon is now experiencing a ‘triple crisis’. Morocco also notably experiences high poverty and inequality. At the regional level, women make up 16% of total employment while making up twice that in unemployment figures.

The inequality observed in the MENA region is no coincidence — this is the result of a decade of austerity policies that have only acted to enforce and re-enforce socioeconomic inequality.

The IMF has played a significant role in this: in both Jordan and Egypt, subsidies, arguably a form of universal social protection, have been increasingly compromised in favor of targeted social assistance. And while subsidy budgets have been slashed in both of these contexts, dedicated social assistance budgets have also decreased and have clearly not compensated for losses.

Healthcare systems are also severely underfunded and the cost is thrown onto citizens. Between 2011 and 2017, the percentage of health care costs paid by the region’s patients (out of pocket expenditure) increased from 30 to 38%. This ratio is significantly high in Egypt (60%), Iraq (58%) and Morocco (54%), which was especially contingent during a global virus outbreak.

Years of worsening inequality in the region shaped the way by which the COVID-19 outbreak impacted wealthy and vulnerable groups. Oxfam calculations on wealth data from earlier this year showed that since the start of the pandemic, billionaires in the MENA region averaged a daily increase in revenue of USD 63 million. As of August, this was estimated at a total of USD 10 billion. Conversely, estimated losses in labour income to workers in the MENA region totaled USD 85 billion.

Meanwhile, the region’s people saw a deterioration in their standard of living during the pandemic. An estimated 45 million people were pushed into poverty, which contributes to the shrinking of middle class. UNESCWA estimated 1.7 million jobs were to be wiped out in the initial months following the global lock-downs: of these, UN Women estimated that 700,000 jobs worked by women would be lost.

This reflects the pre-existing inequality on women’s work and unemployment: despite making up a low ratio of the regional employment, they made up around 40% of forecasted job losses, reflecting both the structural and social factors that have made women more vulnerable in the workforce.

Women also faced disproportionate impacts in their homes: even prior to the crisis, women worked about 4.7 times the amount of care work compared to their male counterparts, and a recent UN Women report highlighted that women reported increases in household labor workloads across all countries in the region. This report also shows that cases of violence against women in the Arab region increased by 55% during the COVID-19 crisis, showing that women continue to bear the brunt of the crisis.

These systems are enforced by IMF-backed loan programs that encourage fiscal consolidation through economic liberalization and austerity measures. And these are further re-enforced by EU macro financial assistance, for which issuance is conditional upon engaging in an IMF loan program.

Improving socioeconomic conditions in the MENA region requires a fundamental rethink of economic liberalization and austerity as an essential pre-requisite for state access to financial support. Inequalities in the MENA region, further exacerbated by the encouragement of austerity policy, have shown their faults during the pandemic. Rollback of state support especially to social protection and healthcare systems are not sustainable, particularly as there seems to be no immediate plan or support for the prospect of re-instating these policies on the long term.

Beyond these, EU trade policies have also re-enforced and risk the worsening of inequalities especially in the Maghreb region. As shown by a recent Oxfam report, since Morocco’s signing of an EU Association Agreement, GDP growth increased between 1 and 7% annually, but high levels of poverty and inequality persist with GINI indices at less than 40. Meanwhile in Tunisia, a DCFTA impact assessment showed potential job gains, but it also warned of job loss in low skill and women-dominated sectors (textiles, apparel, leather goods). Despite there being potential gains from these agreements, losses are often specifically unfavorable to vulnerable groups.

Ultimately paradigm shifts are what is needed to support the reduction of inequalities in the MENA region which is what could ultimately prevent future crises such as those that continue to be endured under coronavirus pandemic and its related lock-down measures.

Existing austerity policies have proven themselves harmful and unsustainable, highlighting the need for overall structural changes to the governance of aid and financing in ways that equitably consider needs, gains, losses, and impacts. This shift puts structures in place that prevent, or at the very least mitigate, the disproportionate impacts that crises carry on to vulnerable groups and supports equitable and sustainable systems for all.