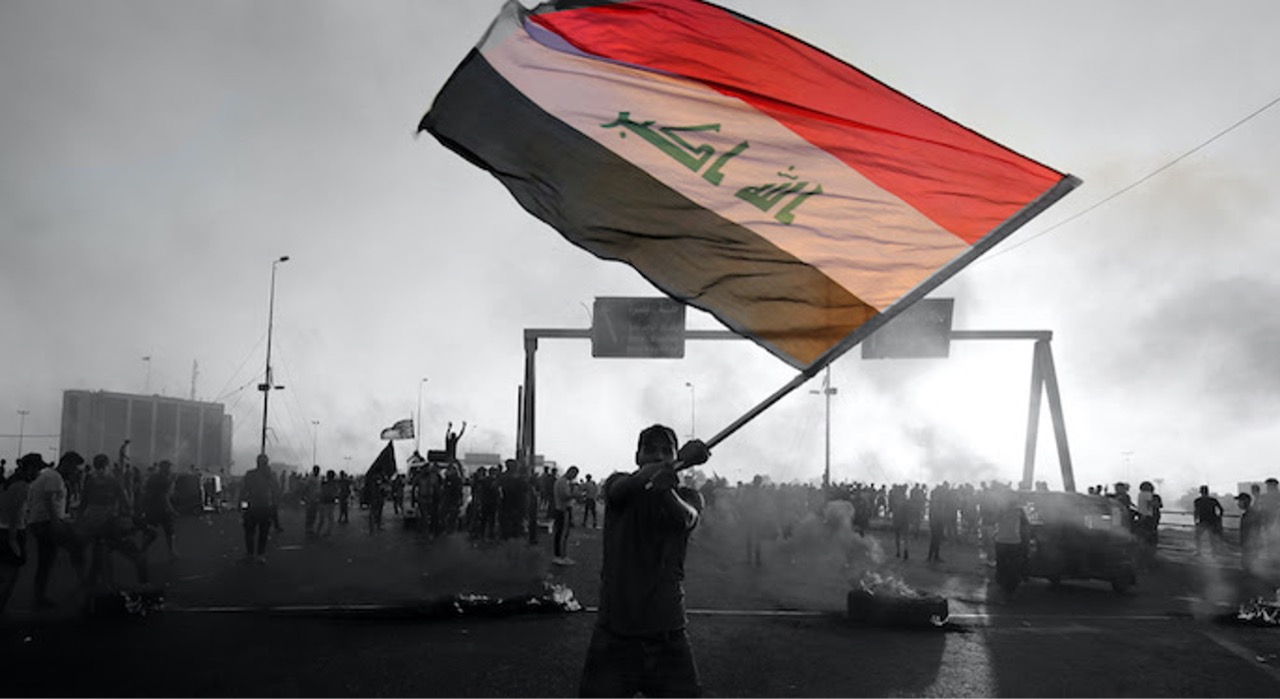 The October 2019 protest movement is a milestone in Iraq's modern history in terms of its geographical breadth, cultural, intellectual. and gender diversity, longevity, and the resolute participation of young people under thirty. The suppression of university graduates protests before October galvanized the participation of the unemployed among them who saw a bleak future. The protest movement was joined by young arts and culture groups, imbuing it with a carnival spirit. The movement enjoyed extraordinary solidarity from the majority of Iraqis. It was strengthened by the remarkable presence of women on all levels and the wide participation of university students. The impetus it gained was unprecedented since the 1940s and 1950s.

The protests subsequently pushed the government to resign, despite the multifaceted violence against protesters. Murder, accusations of treason, intimidation, kidnapping, and detention were used against demonstrators. The attacks left many young protesters with various disabilities, added to around 700 martyrs and hundreds of kidnapped or injured. The protests had erupted after a summer of long electricity cuts. However, they went much beyond the calls for improved services witnessed in prior demonstrations.


Why Did the Protests Break Out?

The Iraq-Iran war, followed by the embargo and the post-2003 period, marginalized many regions and groups, causing poverty, lack of services, and the absence of decent job opportunities. The private sector was too weak. State institutions failed to ensure stability in wages and pensions while facing deterioration, inefficiency, and inability to absorb an army of unemployed youth, who make up 40% of the total in some provinces. On the opposite side, small groups lacking scientific and cultural qualifications took over. They lacked knowledge of the country's wealth, which would change most Iraqi lives and secure their future if utilized and distributed correctly and fairly.

Cultural heritage and openness to the world after 2003 led to increased calls for public liberties in Iraq, including the freedom of expression and the right to assembly, in addition to citizens' fundamental rights. However, the government and Parliament ignored such demands. Suppression and pressures increased. It led to the first clearly defined social movements in modern history. Baghdad is not Kandahar was established following restrictions on rights were applied by the government and Baghdad Provincial Council.

The 'components state' failed. Power, money, and privilege became concentrated in small groups claiming to represent the country's cultural, intellectual, religious, and ethnic components. Subsequently, these influential groups formed their own economic, military, and media arms to control society. Corruption and favoritism spread. Providing human security for citizens became very difficult. Most Iraqis lost hope of an imminent and natural transformation from inside. Protesters began rejecting political parties categorically. Marginalized groups and the unemployed in the protests even refused the presence of parties subject to oppression.

The involvement of volunteer and civil society youth groups in the protests was remarkable. Many called for peaceful demonstrations, which was a change from previous occasions. Culture and art were mixed with demonstrations and brought exhibitions, theatrical and lyrical performances, and book fairs to the squares. Events included marathons and bicycle races, which led to increased youth and family presence, especially in the first few weeks.

The main slogan of the protests and its unified identity was the call for nation-building, rejecting all forms of quotas that lead to political, financial, and other types of corruption.

Many groups who had never participated or whose presence in demonstrations had been weak joined in. They included unions, university students, school students, the unemployed who had not graduated from university, and semi-literate people. Families of all cultural and religious backgrounds participated directly or indirectly through logistical and financial support and various services such as food, water, and medicine. Medical workers who helped the wounded in the protests were joined by lawyers and teachers' unions, the media, and artists. Even the sons and daughters of some government officials were active directly and indirectly. The protests received solidarity from young men and women in provinces that did not witness significant actions.

Mobilization, promotion of protests, and group coordination benefited from social media. Some groups used electronic games as tools for camouflage, gathering, and circumventing the repressive forces. Funnily enough, some said it was a movement of those who play PUBG, a widely popular electronic game among young Iraqis.

The broad participation by women emphasized different groups' ability to destabilize Muslim subordination and marginalization of women in society and decades of disregard for their capabilities in public life. It demonstrated the capacity to stand up to the various challenges they face as women. The participation of these women's groups motivated other women to join the protests, as an essential component for a better future role for women in public life. This participation was even broader on social media.

Coordination between the various sectors and provinces contributed to the protests' sustainability and development of demands. It motivated groups, such as youth, to increase their political participation, carrying out campaigns on election laws and public freedoms. Media appearances by young people became regular and more competent after being marginalized for so long. Their demands evolved to include an end to violence against women, the need to enact family violence law, and other policies.

The protests withstood the unspoken alliance between the regular and irregular forces (some Shia armed groups) to suppress the protests through murder, kidnapping, and threats. They remained steadfast and highly influential in public. Some of the protest leaders gained the ability to negotiate and cannot now be ignored.

However, the lack of an agreed leadership allowed the infiltration of government-allied parties and coalitions. Political and social demands were not deeply thought out. Nevertheless, they pushed the government to resign after failing to achieve any real change in the political process.

Thus, broad participation gave birth to a culture of demanding rights and freedoms and calling to improve the country's economic, social, and political situation. It will allow civil society to build a peaceful human rights culture and influence its environment. It also helped build the capacities of volunteer youth groups, directly and indirectly, with a qualitative and peaceful effect on the movement's demands.

The Baghdad Tahrir Square sit-in was dispersed on October 29, 2020. Many young groups were disappointed when they saw the same leaders who they protested against remain in power. They remained highly influential over the government, which has not regained its authority. Nevertheless, it meant greater awareness and broader calls for youth participation in politics for other groups. Parliament reduced the candidacy age from 30 to 28, although the demands called for a reduction to 25 years. The protests also achieved a high level of coordination between groups. They created various creative forms of demonstrating, encouraging other people to participate.