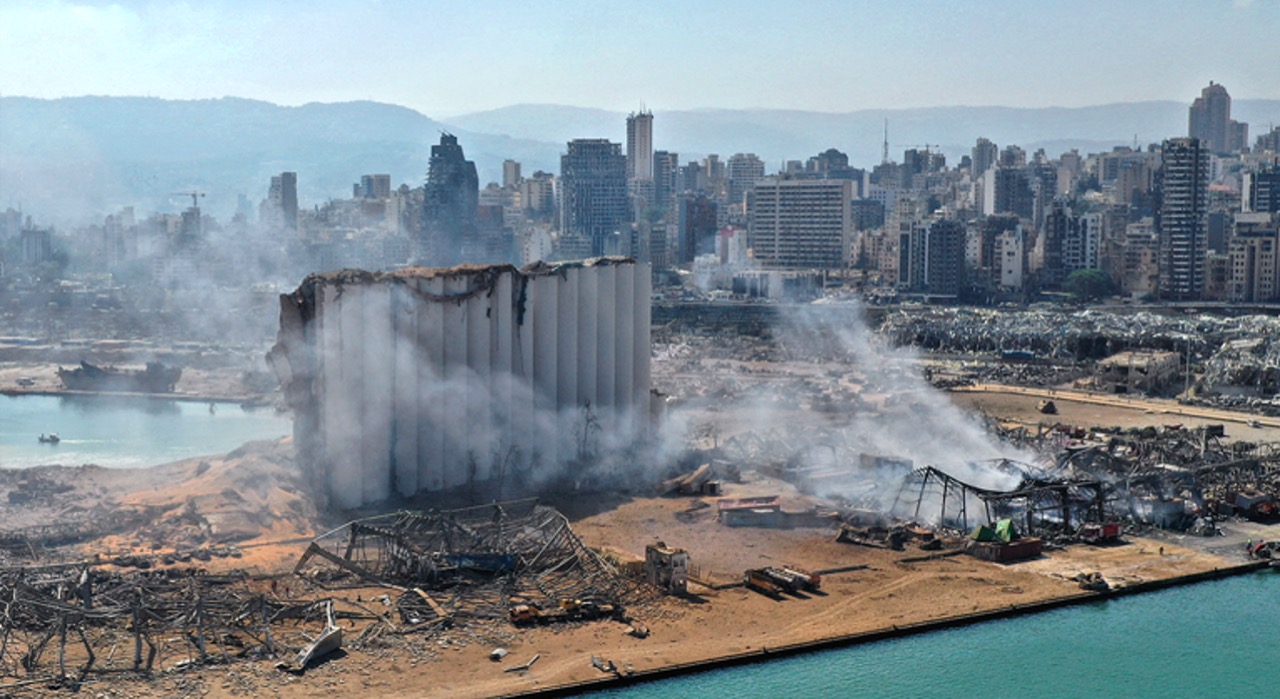 Beirut Port Explosion Is a Result and not a Cause

The explosion on the 4th of August was heard in Cyprus and felt in Jordan, where it registered an earthquake of 4.4 magnitude. It was considered the third strongest explosion after Hiroshima and Nagasaki. It was a result of several factors, which could be seen as a precursor and a cause.

First was the stifling economic crisis that began in the summer of 2016, but worsened in the summer of 2019.  Lebanon began to suffer from a deficit in the budget, the treasury, and the balance of payments. Speculations on currency prices returned for the first time since 1993. The situation required radical reforms to stop waste and adopt measures to control public spending and boost imports, in addition to obtaining financing from abroad in the form of investments, grants, loans, or foreign transfers. Two international conferences were devoted to donors in Paris. The first was held in March 2018, on the eve of the parliamentary elections, and the second in December 2019, when the IMF was tasked with supervising the implementation of the reform package required to obtain grants and loans. However, the package was not implemented.

The popular revolution of October 17 was as a response to the economic collapse, which the authorities were unable and reluctant to deal with. The revolution demanded that the regime steps down, withdrawing its confidence and holding it responsible for the collapse. There was a lack of conviction in its ability to manage the situation and complete the reforms necessary to get out of the crisis. The October Revolution led to the toppling of two governments in a period of 9 months, demanding an independent government to lead the country in the transitional period. The financial and monetary crisis worsened during the revolution. Banks stopped paying dues to small depositors, except according to certain conditions and ceilings. Lebanon also stopped paying its foreign currency debt. A law to control the transfer of capital abroad was applied without being approved in Parliament, which opened the way for discretion. Influential persons and capitalists were allowed to smuggle their money abroad, as other depositors were deprived of it. The capital that migrated after the outbreak of the October Revolution is estimated at 20 billion dollars.

The global pandemic had an impact on all countries, as well as on international relations. Its effects on Lebanon were double due to the economic crisis, which caused an increase in unemployment, poverty, and inflation rates. The poverty rate hovered around 40%. Inflation rates reached unprecedented levels, accompanied by the collapse of the national currency, which lost 80% of its value. The percentage of workers in the informal sector in Lebanon reached 60%, leaving the majority of the population outside social protection systems.

Lebanon is part of a region that suffers from occupations, armed conflicts, and wars between regional and international axes whose main drive is a historical struggle over influence and natural resources. These crises have contributed to the division of Lebanese society in light of a weak state in which institutions do not play their full role in formulating internal or external public policies.

The sectarian and partisan quota system continues to practice neglect and corruption at the highest levels, leading to the August 4 explosion, which shed a bright light on the level of state collapse and the lack of will for reform. The judiciary was aware of the existence of dangerous materials and issued decisions that were not implemented. The same applies to the relevant security agencies, the port authorities, and the political leadership at the level of the concerned ministers and the first and third presidencies. They all knew. However, poor coordination, on the one hand, and the lack of will for reform on the other hand, meant that nothing was done. All the parties of the regime are silent about the chaos in the port and in other public facilities because they benefit from the proceeds of corruption, each in their own way and through their associates in public administrations who are employed to collect the share. All these practices plunged Lebanon into bankruptcy and led it to the most painful moment in its history. When the port blew up, it caused the worst catastrophe the country had known in the first centenary of its founding.
The painful reality of the Lebanese state and its institutions has led to the absence of a national disaster management strategy to respond to similar cases, especially since Lebanon is vulnerable to natural (fires) and security (the 2006 Israeli aggression) disasters. Despite the existence of the Disaster Management Authority since 2013 according to a decree issued by the Presidency of the Council of Ministers, which established the position under its authority. However, the absence of a law to establish a national institution for disasters, as a result of the quarrels over its powers in parliamentary committee deliberations, resulted in the authority's powers being limited. Consequently. The High Relief Commission (whose mission is to identify people and their needs) and the Lebanese Army Command (aid distribution) were assigned with relief work, although the disaster requires a comprehensive national strategy that takes into account its different dimensions, its size, and severity.

The city of Beirut one of the oldest cities on the Mediterranean, the city port played a role in flourishing the Phoenicians trade. Beirut arose and expanded around its port, created by Muhammad Ali Pasha in the 1830s, before the capital of Sidon Wilaya moved there. The port was developed in 1887 leading to an increase in the population, which did not exceed six thousand at the time. It became more important during the era of The Mutasarrifate (1861-1918). The city's neighborhoods adjacent to the port are the oldest and contain luxurious and beautiful surroundings. Some buildings are more than 150 years old and suffered the brunt of the explosion, which makes the restoration process a complex issue if the goal is to preserve the city's heritage and the traditional character marking it since the nineteenth century.

Following an initial field inspection it carried out in the first days after the explosion, the Order of Engineers reported that "a total of 30 to 40 buildings are in danger of collapse after being completely destroyed, in addition to the damage of 800 to 900 homes that are no longer habitable." The initial report concluded that the total number of damaged buildings amounts to 39 to 40 thousand and close to 200 thousand citizens lost their homes" (18 August). According to the Antiquities Directorate of the Lebanese Ministry of Culture, 640 historical buildings have been damaged, including 60 at risk of complete collapse. They are among at least 8,000 buildings damaged by the explosion, including museums, art galleries, and religious sites (15 August). The explosion also destroyed all the shops, stores, cafes, restaurants, and offices, most of which were closed and their staff dismissed. This is in addition to the severe impact on the infrastructure. Therefore, the process of restoration and reconstruction is complicated and requires planning and organization that exceeds the capacity of public administrations and voluntary and international organizations involved in the relief work.

Civil initiatives that seek to coordinate their field work and whose efforts converge with concerned international organizations have a positive, albeit insufficient, effect. Volunteers removed the rubble and restored what could be restored. They also provided humanitarian aid to the affected population, including clothing, food, and housing, using available resources. Around 7,000 wounded were treated, of whom about a thousand were hospitalized and 130 were placed in intensive care. The number of casualties is about 200.

The head of the Bar Association initiated a coordination committee in partnership with the Order of Engineers, contactors, and accounting experts to contribute to facing challenges and provide appropriate support to the population. The process requires coordination at higher levels by the state and public administrations, but the system of corruption that caused the disaster, and bankrupted the country before that, has been laid bare and is unable to carry the burden. The regime failed to protect the crime scene, which was exposed to three fires, destroying evidence and documents that could have been useful in the investigation. We cannot expect it to have a role in relief and reconstruction work.

The Lebanese Regime After August 4

Beirut will not rise from the rubble "like a phoenix" unless conditions are met, which begin with the reconstruction of the state and its institution, restoring the sound, historical regional relations that characterised Lebanon for decades and had made it into a destination and haven for guests, tourists, and the downtrodden and freedom-seekers.

Lebanese citizens have been calling on the corrupt and consociational regime to allow for an independent government to manage the political transition:

Conduct an independent investigation into the crimes on August 4 and on August 8 when the security forces used live ammunition against peaceful protesters, causing 770 injuries including loss of eyesight, holding accountable those responsible for the crimes.  Carry out the necessary economic, financial, and monetary reforms to restore the confidence of the Lebanese and international community in the authorities and to obtain the promised donations and loans.
Take measures to enhance the independence of the judiciary to carry out its supervisory role, especially in the field of administrative and financial inspection, conduct investigations into corruption, hold accountable corrupt persons responsible for the collapse of the country, and seek to recover the stolen money.
Form an independent body to propose an election law and organize free, fair, and democratic elections to reconfigure power.

Carry out administrative reforms that enable the state to play its role in relief, reconstruction, and in preventing smuggling through legal and illegal crossings.  On the first of September, 1920, General Gouraud, the French High Commissioner, stood on the steps of the Pine Palace to announce the founding of Greater Lebanon, a categorical Lebanese demand at the time. One hundred years later, French President Emmanuel Macron stood on the same stairs to point to the system of corruption, announcing a road map to political, financial, and economic reform, asking it to give way to a new generation of politicians to lead the country in the transitional phase and get out of the crisis, stressing that there is no funding without reform.
Lebanon will not be able to remain an independent, sovereign, free, and democratic state unless it transitions from the sectarian system into secularism and the separation of religion from the state. The state should regain its security, administrative, and political sovereignty over its entire territory and especially over its foreign policy and especially decisions of war and peace.

Lebanon and the Lebanese have wasted an entire century on sectarianism and corruption, so let the next century be the century of modernity, progress, and prosperity.