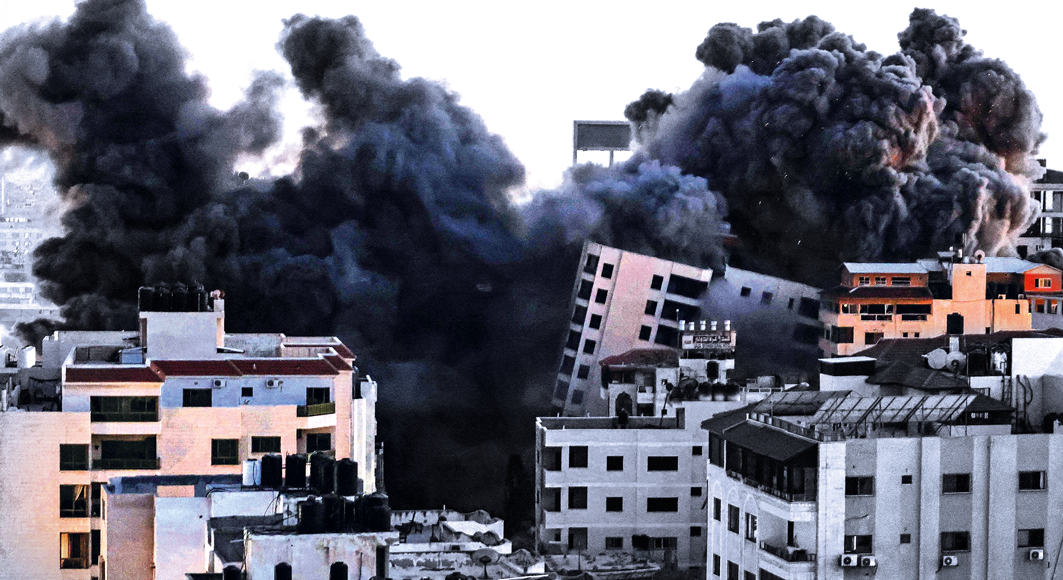 On May 10th 2021, the Israeli Occupation Forces launched a large-scale military attack on the Gaza Strip. During the 11-day attack, Israeli planes, battleships and arterially bombarded civilians and their properties as well as civilian objects and infrastructure facilities. At the peak of this significant escalation, life in Gaza was disrupted and the humanitarian conditions deteriorated for more than 2 million Palestinians who had been under Israeli blockade for 14 years.

Moreover, citizens lacked the basic and essential services needed for them to have a decent life during the military attack. Hence, their only concern became seeking shelter and finding personal security and safety.

The forced displacement of civilians

More than 100 thousand civilians, most of which were women and children, were forced to be displaced due to the fear of a land invasion, in addition to the Israeli bombardment which totally destroyed 1300 housing units and almost fully damaged another 143154 unit. 1

People who were displaced have taken refuge in hospitals and public squares as well as The United Nations Relief and Works Agency for Palestine Refugees (UNRWA). Over the course of the displacement, they suffered from constant power and water cut, lack of food, lodging supplies and protection against Covid-19 which threatened the increase in the number of infections with the virus which spread prior to the aggression in the Gaza Strip.

During the aggression, Palestinians suffered genuine difficulty accessing medical services due to the intentional targeting of roads leading to hospitals and health care centers. The aggression also burdened the fragile medical staff and system which were already suffering of a severe deterioration resulting from the Israeli blockade policy.

The total number of victims reached 253 deaths, including 66 children and 39 women. Moreover, 1948 individuals, including 540 children and 361 women, were either slightly or severely injured. 2 During the aggression, medical facilities suffered from lack of specialized medical staff, essential medicines and medical supplies; noting a loss of  45% of the list of essential medicines, 33% of medical tasks and 56% of laboratory and blood banks supplies.3  The situation was further aggravated by the Israeli bombardment of a number of medical facilities, including the central laboratory of the Ministry of Health, which stopped conducting Covid-19 tests. The bombardment also stopped the direct contact dedicated to providing telemedicine services and providing medical consultations to citizens during the aggression and the Covid-19 pandemic. 4

Power shortage and cuts on citizens and vital facilities

The power cut crisis in Gaza worsened during the aggression since oppression authorities banned the fuel supply needed for the activation of the only power plant, in addition to the destruction of a large part of the electricity distribution network.5 The electric company announced that the power deficit rate reached about 72%, leading to an average of 3 to 4 hours of electricity per day. Moreover, the company declared that 700 thousand civilian were touched by the power cut crisis.6

During the aggression, residents in the Gaza Strip suffered from a long-term shortage in drinking water, which led municipalities to activate saline water wells. The Water Authority also stated that its ability to provide residents with water decreased by 40%, as a result of the, either direct or indirect, Israeli targeting of water supplies in most of the Gaza Strip governorates.7

The Water Authority claimed that the targeting of sewage lines diverted waste water to random basins or pumped it into the sea with no treatment, which led to a major water pollution. Hence, technical staff encountered obstacles in maintaining these stations due to the difficulty in accessing them.8 The cessation of sewage treatment plants threatens the occurrence of a serious health constraint amongst residents, in addition to the re-contamination of aquifers.

The occupation aircrafts targeted with missiles several main roads and intersections in the Gaza Strip governorates, which led to the obstruction of citizens’ movement from and to central areas in order to obtain food supplies and reaching primary services such as hospitals and health care centers. The destruction also banned local authorities, international missions and other relief organizations from offering help to residents.

Relief efforts during the military aggression

During the Israeli aggression on Gaza, the local relief efforts were not up to the mark before the huge disaster that took place over Gaza. In fact, besides the late food support for a limited number of families, especially displaced, they were not rescued and not provided with basic necessities such as bedding, blankets and protection supplies from Covid-19. Furthermore, international relief efforts were almost completely absent and international aid was limited to food or a limited amount of money to help buy food.9 These organizations were expected to offer medicines and medical supplies to medical facilities who suffered from an unprecedented shortage in these needs. These bodies did not also provide the needed fuel to operate power generators in hospitals and vital facilities such as water and sanitation.

This failure in relief works during the aggression is due to 3 main reasons: First, the Israeli blockade and the closure of all crossings that supply Gaza with goods. Second, external relief bodies did not anticipate the aggression and hence were not ready to exercise their required role.

As for the 3rd reason, it comes down to the financial deficit that local and international relief agencies suffer from which has negatively affected their performance and has weakened their role.

The most important challenges are :

Human Rights Organizations have considered this mechanism as giving international legitimacy to collective punishments and war crimes against civilians.

- The failure of international donors to fulfill their financial commitments concerning the reconstruction of what was destroyed by the aggression of 2021, especially since several donor countries still have not fulfilled their financial pledges that they committed at the "Cairo Conference for reconstructing the Gaza Strip", which was held in Cairo back in 2014.

To conclude, despite the importance of relief interventions to provide the residents of the Gaza Strip with basic needs and to save them from the calamities that has befallen upon them, the most crucial priority is to prepare a comprehensive and integrated reconstruction plan that responds to national needs. Moreover, the plan must be prepared in a participatory manner among the various local authorities, with international guarantees and support, as it should also be based on the development approach to restore the destruction caused by the aggression and the catastrophic and  unjust Israeli blockade, and to identify the needs in the various affected sectors according to priorities, so that this process can be characterized by integrity and transparency.

Director of the Economic and Social Rights Unit, Palestinian Center for Human Rights

1- For more on the destruction of citizens’ homes in Gaza during the 2021 aggression, and their geographical distribution, May 20, 2021, check the link of the Ministry of Public Affairs and Housing

2- The Palestinian Health Ministry, an update of the total amount of the victims of the Israeli aggression on the Gaza Strip, May 31st 2021. Check the link below

3- Al Jazeera Net, Gaza : the war is taking down anti- Covid measures and implementing fears of a 3rd severe wave. Check the link below:

4- Palestinian Ministry of Health : press conference to denounce the targeting of the ministry’s headquarters and the injury of a number of health care staff, May 17th 2021. Check the link below:

5- For more on the electric crisis in Gaza and its newest updates, May 20th 2021. Check the website of the Electricity Distribution Company on the link below:

7 – For more, check the Palestinian Water Authority’s statement, May 16th 2021, on the website

9- For more on the food situation in the Gaza Strip, check the interview held by Director of the World Food Program in Palestine with United Nations News website, May 19th 2021 on the link below:

10- The Palestinian center for Human Rights “Four years without adequate shelter” report, December 23rd 2018. Check the report on the center’s website below