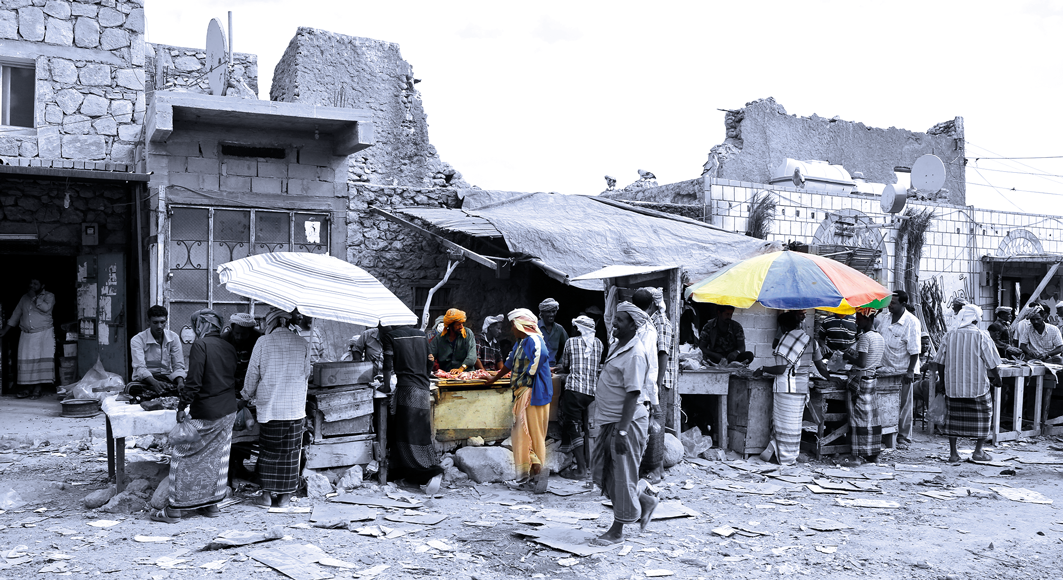 Towards sustainable humanitarian aids and relief in Yemen

Aids in Yemen between urgent need and long-term risks!

Day after day, the Yemeni Riyal is witnessing a significant deterioration in its value against the dollar and other hard currencies. This indicates that Yemen is still experiencing a deterioration in its economy while it goes into the 7th year of war in light of the worst humanitarian crisis in the world!

The Yemeni Riyal has lost more than two-thirds of its value since the beginning of the war whereas 50 thousand people live in a famine-like state; more than 21 million Yemenis need assistance and protection as they make up 66% of the population, according to the United Nations reports.

Unfortunately, this tragic situation keeps on aggravating with the ongoing war and the failure of ongoing peace consultations in the capitals of neighboring countries, which are the powerful decision-makers in the existing Yemeni war.

The reports of the United Nations Agencies confirm that their ability to offer life-saving humanitarian aids such as food, water and healthcare has significantly decreased from 14 million people per month to 10 million only due to the lack of funding; noting that this is the minimal coverage. For instance, 2.3 million Yemeni children under the age of five suffer from severe malnutrition, including 400 thousand children who might die in case they do not receive immediate treatment!

The United Nations assure that, through the help of relief Agencies, it carried out the biggest and fastest aid operations in modern history in 2018, where it almost reached 14 million people per month, preventing the occurrence of a widespread famine and the spread of deadly diseases such as the Cholera and others. However, the case of relief and humanitarian aid is one of the heated and complex issues.

Relief aid is crucial to the current Yemeni economy since its total volume is nearly equal to the General State Budget. Moreover, relief aid became an equivalent economy to the official economy despite the severe future risks it carries. Its most prominent risk is creating a broad community of people dependent on urgent aid, in case all parties do not change the adopted strategy to deal with this case.

Challenges that the aid path faces in Yemen

In recent years, many donor conferences were held for Yemen. The last of which was the fourth conference held in March 2021 where donors pledged to offer 1.7 billion dollars. However, the United Nations Secretary-General Guterres, found this amount “deceiving” since the UN was aiming to collect 3.85 billion dollars. Nevertheless, he considered this as a down payment, appealing for donor countries to make generous donations in order to avoid a widespread famine.

Despite the importance of the continuous humanitarian relief in Yemen to mitigate the deterioration of the humanitarian situation and to protect the most vulnerable groups to risks of hunger and disease, the relief management and distribution is being criticized for the lack of transparency of the United Nations Agencies and international organizations and their local agents working in the relief sector, as well as the impact of the political and military forces in control of the way those relief materials and aids are distributed.

While the operational expenditures of relief agencies operating in Yemen exceed 40% of the total grants allocated to Yemen, many of those funds focus on temporary and unsustainable daily relief work, not to mention the inability to reach the neediest groups in regards to the many negative effects and complications of the political, security and military situation.

This explains, in one way or another, the inability of these efforts to stop the rapid deterioration of all negative indicators on all economic, social and humanitarian levels.

In fact, humanitarian work partners in Yemen are making remarkable efforts to contain the crisis, but the latter seems to become more severe with the persistence of its causes and the narrowing of opportunities for Yemenis to resume their normal lives.

Yemenis are facing both local and regional wars at once. At the local level, humanitarian relief operations are facing challenges such as trying to shift the relief operations in favor of parties to the conflict. For instance, an investigation held by the American Associated Press, revealed that important people in the Houthi movement exploited and redirected the humanitarian aid.

The aspects of control and influence affecting the conduct of relief operations in Yemen vary. In fact, the Houthi movement imposes 2% of the expenses of all humanitarian projects in its favor and determines the allowed projects. It also requires the need to take the permission of its executive officials for distribution operations in all areas under its control, which prompted the World Food Program to announce the suspension of its activities in Yemen earlier.

In addition, we come across another aspect to the problem that is the failure to benefit from donor funds in enhancing the resilience of the Yemeni Riyal, given that a large part of these funds is spent outside Yemen.

In this context, it is important to reconsider the strategy adopted by Relief Agencies and Organizations in Yemen. On one hand, to ensure their independence and their ability to reach people in need directly and on another hand, to follow a methodology based on continuity and economic empowerment of local communities.

A part of the resources consecrated to relief and humanitarian support should be reallocated to support sustainable solutions. Yemen is in desperate need to revitalize faltering pioneer projects and to support new innovative projects through policies and procedures aiming to support leading initiatives during conflict, in addition to an effective partnership between business pioneers, the government, international support organizations and the private sector.